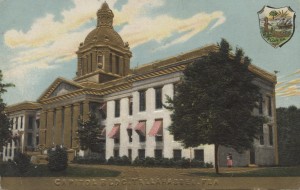 The CENTRAL BANK OF FLORIDA was chartered on February 11, 1832.  Benjamin Chaires, the banks president, was an important Tallahassee cotton planter who also participated in the founding of the Tallahassee Rail Road Co.  At his death in 1838, his estate showed he had 10,000 acres of land and 80 slaves.  Leslie A. Thompson served as the banks cashier.

$300 Check issued from the Central Bank of Florida

The UNION BANK OF FLORIDA, was chartered on February 12, 1833, and was the first to be approved by Governor Duval.  The Union Bank would prove to be one of the most ambitious banks to operate in antebellum Florida.  John G. Gamble remained  president of this huge political entity, the governor and Territorial Council being in complete complicity with the bank officers.  John Parkhill and later Charles F. Mercer, would serve as the bank’s cashiers.

Union Bank of Florida, Tallahassee (written date of May 1, 1840)

Chartered originally as the Merchants & Planters Bank at Magnolia on February 8, 1832, a later charter was approved on February15, 1834 granting the right to establishbranches at St. Joseph and Tallahassee.  When the town of Magnolia disappeared, the Merchants & Planters commenced business in Tallahassee in 1836 or 1837.  The officers were Martin Brooks, president and Thomas Bertram, cashier. The SOUTHERN LIFE INSURANCE & TRUST CO.  was established in 1840 or 1841, the parent bank being located in St. Augustine.  J. Williams served as cashier of the bank with George Field as president.  Notes are of similiar style to those of it’s parent bank in St. Augustine.

1844 $3 Note  with Kennedy engraved. Signed by Rutgers, cashierr and Graham as president (B-22) Bank of Florida, Tallahassee (At the office of D.L. Kennedy, New York) 1843 $4 Note  without Kennedy engraved signed by Rutgers, cashier and Booth, president  (B-9)

The State Stock Bank was a fictitious bank, notes were produced by modifying the plates of notes of the Government Stock Bank of Ann Arbor, Michigan.  Most notes are from reconstructed backs of South Carolina and Floirda notes, as seen below.  Also featured here is one original intact $5 note with plain back. $10 State Stock Bank Note Reconstructed from the back of 75 Cent Corp. of Tallahassee Notes

Demand notes printed by American Bank Note Company.  On Januart 21, 1851, the state legislature authorized the incorporation of the State Bank of Florida but, it was not until 1855 that the legislature approved a viable bank, and Florida’s first bank aftr statehood raised money and opened in early 1859.  Denominations overprinted in large red letters except on pro0fs. Scrip redeemable at the Union Bank of Florida, handwritten dates between 1837 and 1841.

1838, The Corporation of the city of Tallahassee.
12 1/2 cent note features Maiden on left, train in the center, and on the right is a steamship (Unique and Unlisted) The Tallashassee Rail Road Company was incorporated by an act of the Territorial Legislature on February 10, 1834.  The legislation gave the company 500,000 acres of land and broad authority to take whatever land, lumber or stones they needed along the route provided owners received just compensation. 1826A road was being constructed from Tallahassee to the St. Marks River

1836 The first train traversed the railway

1838 30,000 bales of cotton traveled on the railroad since its operations began

1839 The railroad was extended to Port Leon with the construction of a bridge over the St. Marks River

1843 A hurricane demolished the section of rail in and leading to Port Leon, and St. Marks became the new southern terminus of the railroad

1865 Tallahassee-St. Marks Railroad moved hundreds of confederate troops during the Civil War to the Battle of Natural Bridge 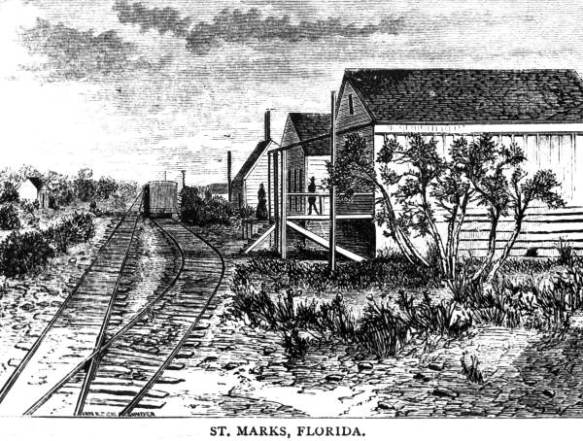 1984 The Florida Department of Transportation purchased 16 miles of the corridor and Florida’s first “Rails to trails” project began.

Demand notes payable in transportation.  Printed by the American Bank Note Company.  Signed by F.H. Flagg as secretary and E. Houstoun as President. Later issue with elaborate printed backs signed by Flagg and either J.S. Stone or M.L. Littlefield as President. The Tallahassee Railroad was one of the first operational railroads in the United States headquartered in Tallahassee, Florida. It was constructed in 5 ft (1,524 mm) gauge.
The railroad was conceived and financed by leading cotton planters who needed a way to get their crop to textile mills in England and New England. It was also used by naval store merchants and timber interests of the area to transport the their goods to East Coast ports.
The Tallahassee Railroad Company was approved in 1835 by the Florida Legislative Council. Also that year, the Tallahassee Railroad Company received the first Federal land grant to a railroad. In 1835 construction began on the Tallahassee St. Marks Railroad.
The drawing by Francis Count de Castelnau is captioned with: “Railway depot at Tallahassee. Florida already has a railroad, which although short renders great service. It extends from the capital to Saint-Marck on the Gulf of Mexico about 7 leagues away. It crosses such a very deep sandy region that, before construction, it was scarcely possible to cross it on horseback. It serves chiefly to transport cotton from the interior to the sea.”
The railroad was completed in 1837 and began operation that year. It was a mule-drawn railroad that connected Tallahassee, Florida, then the territorial Capital, with the Gulf port of St. Marks — a distance of 22 miles (35 kilometres). By 1838 the railroad extended three miles south to Port Leon.
In 1843, Port Leon destroyed by massive hurricane. The railroad terminal there is moved back to St. Marks. In 1856, the wooden rails are replaced by steel rails and mules are replaced by locomotives. During the Civil War, the Confederates used the railroad extensively to move troops, artillery and supplies in defense of Tallahassee. In March 1865, the railroad achieved its highest military significance when it was used to deploy Confederate troops quickly south from Tallahassee in the face of an advance by Union troops. The railroad enabled Generals Samuel Jones and William Miller to put enough men into place to defeat Union General John Newton at the Battle of Natural Bridge on March 6, 1865. In 1880, the railroad began to transport naval stores and timber for Leon County’s logging industry.
In 1983, the Seaboard Railroad filed to abandon the line between Capital Circle in Tallahassee and St. Marks. The Tallahassee-St. Marks line has the distinction of being the longest operating railroad in Florida and served the area for 147 years. One unknown traveler called it “the worst that has yet been built in the entire world.” In 1984 the corridor was purchased by the Florida Department of Transportation. The Florida Park Service currently maintains it as the St. Marks Trail.
Source: Wikipedia
Willis Alston (written date of February 17, 1834) July 1828 Term   This day the Court of the County of Gadsden was opened agreeable to law. Present his Honour Judge Robinson.No. 1   Elihu Atwater and Leslie (?) A. Thompson were nominated by Francis A. Cash Esqr as practicing attorneys of this Court and were admitted accordingly.Personally appeared R. K. Call who being duly sworn deposeth and saith that Charles Louis Napoian Achelle Murat has been a resident of this Territory of Florida more than on year, during which time he has behaved as a man of good moral character, that he appears attached to the preamble of the Constitution of the United States and well disposed to the good order and happiness of the same. R. K. CallNo. 2   Sworn to in open Court by R. K. Call this 14 July A.D. 1828 E. A. Robinson, Clk by H. McNeil, D. ClkCounty Court of Gadsden County, Territory of Florida July Term 1828Personally appeared in open Court Charles Louis Napolean Achelle Murat, a native of France, who having produced to the Court satisfactory evidence of his being entitled to become a citizen of the united Sates and of his having been a resident of this Territory for more than one year and after being duly sworn deposeth and saith that he will support the Constitution of the United States of American and that he doth absolutely and entirely renounce and abjure all alegiance and fidelity to every foreign prince, potentate, state or soverignty whatever, and that owing no allegiance to any prince, potentate, state or sovereignty he cannot renounce such allegiance to any of them by name, and that he doth furthermore renounce any and every hereditary title of nobility which he has borne or to which he is entitled in any state or Kingdom whatever. No. 3        Achille Murat Scrip, payable in postage, with the imprint of Morris Printer Philadelphia.  Signed by William Hilliard though records do not indicate him ever being a postmaster. Henry L. Rutgers was a successful lawyer that issued two set of scrip, one from November 1841 and the other dated January 1, 1842. Henry L. Rutgers was a successful lawyer that issued two set of scrip, one from November 1841 and the other dated January 1, 1842.

W.L. Robinson Dated scrip October 1, 1877 that was good for 25 cents payable in merchandise only.  Imprinted by the American Bank Note Co. Philadelphia.  Printed location is Leon County Florida rather than Tallahassee.

1902 Date Back 3rd Charter note on the First National Bank of Tallahassee, FL.
Charter #4132 Signed by President George Lewis and cashier George E. Lewis.
This is the ONLY 3rd charter note known on the bank and 1 of 2 $100 Date Back notes on the entire state of Florida

The First National Bank of Tallahassee was issued a national charter on October 2, 1889. The officers chosen to run the bank was George Lewis, President and W.C. Lewis was appointed the cashier duties. In July of 1916 First National forfeited their charter to become Lewis State Bank, a voluntary liquidation aided the process.