The name “Punta Gorda” has been on maps at least since 1851, referring to a point of land that juts into Charlotte Harbor, an estuary off the Gulf of Mexico. During the late 1800s early settlers began to arrive in the Punta Gorda area.

Frederick and Jarvis Howard, Union Army veterans homesteaded an area south of the Peace River near present day Punta Gorda about a decade after the close of the American Civil War. In 1876, James and Josephine Lockhart bought land and built a house on property which is now the center of the City of Punta Gorda. Approximately two years later Lockhart sold his claim to James Madison Lanier, a hunter and trapper. Lanier with his wife lived there until 1883 when 30.8 acres were sold to Isaac Trabue who purchased additional land along the Harbor and directed the platting of a town (by Kelly B. Harvey), “Trabue,” the original name of the City of Punta Gorda.

Less than ten years after the first settlements in the area, railroads rolled into the town of Trabue in June 1886, and with them came the first land developers and Southwest Florida’s first batch of tourists. The town was renamed Punta Gorda (Spanish for “Fat Point”) in 1887.

Punta Gorda became the southernmost stop on the Florida Southern Railroad, until an extension was built to Fort Myers in 1904, attracting the industries that propelled its initial growth. One man drawn to the area was George Brown, an African-American shipbuilder and landowner, who became one of Punta Gorda’s founding fathers.

In 1887, 12 years after the first settlers trekked to Charlotte Harbor, 34 men, four of whom were African-American, met at Hector’s Billiard Parlor and Drugstore to discuss incorporation.

Once Punta Gorda was officially incorporated, mayoral elections took place and a council was formed. Four of the five council members elected were not American citizens, and the remaining councilman was a native of Florida, Albert Gilchrist.

In 1890, the first postmaster of Punta Gorda was appointed. Robert Meacham, an African American, was appointed by jilted lawyer Isaac Trabue as a deliberate affront to the Southern mentalities of the original community. Trabue had come to Punta Gorda to create his own town, named after himself. When the founders incorporated Punta Gorda without Trabue, he vowed revenge. Trabue eventually left the area and returned to his home in Kentucky.

In 1885, phosphate rock was discovered on the banks of the Peace River just above Punta Gorda. Phosphate was a valuable mineral for fertilizers and many other products, and was in great demand worldwide. At first the phosphate was barged down the Peace River to Port Boca Grande, where it was loaded onto schooners for worldwide shipment. But by 1905 it was felt that building a railroad to Port Boca Grande and carrying the phosphate to it by rail should improve the method of shipment.

Early Punta Gorda greatly resembled the modern social climate of various classes living together and working together. While the regal Punta Gorda Hotel, at one point partly owned by Cornelius Vanderbilt, reflected the upper class, Punta Gorda was a pretty rough town, as most frontier towns were. In the early days, Punta Gorda’s location at the end of the railway line made it a popular destination for some pretty shady characters, resulting in around 40 murders between 1890 and 1904.

In 1925, a bungalow was built by Joseph Blanchard, an African-American sea captain and fisherman. The Blanchard House still stands as a museum, representing middle-class African-American life in the area. Exhibits cover political, civic and religious life; founding families; education; and the Civil Rights Movement through vintage photos, newspaper clippings and family heirlooms.

The Blanchard House and Museum of African American History and Culture of Charlotte County highlight the community that thrived from the town’s founding until integration led residents to move away and businesses to close. In addition to exhibits, the museum serves as a community center with a library of books by black writers, a book club, seminars on African-American history and culture, and leadership classes.

Punta Gorda in the 20th century still maintained steady growth. Charlotte County was formed in 1921 after DeSoto County was split. Also in 1921, the first bridge was constructed connecting Punta Gorda and Charlotte Harbor along the brand-new Tamiami Trail. This small bridge was replaced by the original Barron Collier Bridge in 1931, and then by the current Barron Collier Bridge and Gilchrist Bridge crossing the Peace River. 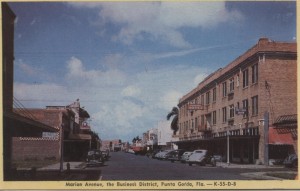 Signed by J.T. Swinney, cashier and E.W. Smith president.  This crisp new note is the finest known for this one bank town.