In 1539 Spanish conquistador and explorer Hernando De Soto noted a Timucuan Indian village at the site of present-day Micanopy. Over two hundred years later, the American naturalist William Bartram recorded his impressions of a proto-Seminole village named Cuscowilla in this same locale.

By the time Spain ceded its Florida provinces to the U.S. in 1821, the newly constructed hamlet of Micanopy became the first distinct United States town in the Florida Territory. One of the founders was Moses Elias Levy, a wealthy businessman and philanthropist who was involved in West Indies shipping and other interests. He came to the United States in 1820.

Named after a Seminole chief, the village of Micanopy was built under the auspices of the Florida Association of New York (the earliest Florida development corporation, headquartered in Manhattan). Chief Micanopy lived about 60 miles (97 km) south in present-day Sumter County. In 1821 when the territorial village was developed, a faction of Miccosukee Indians lived in the immediate area. The historian C. S. Monaco has suggested that the town was named after Micanopy “to appease the chief and acknowledge his original authority over the land.”

Both Fort Defiance (1835–1836) and Fort Micanopy (1837–1843) were located here during the Second Seminole War. Some of the bloodiest battles of that war took place along the road southwest from Fort Micanopy to Fort Wacahoota, just inside modern Alachua County. A recent archaeological study has verified both forts as well as the location of two battlefields within the town limits: the Battle of Micanopy and the Battle of Welika Pond (1836).

Micanopy’s historic district was listed on the National Register of Historic Places in 1983. The home of Marjorie Kinnan Rawlings, where she wrote The Yearling and Cross Creek, is in nearby Cross Creek. The house is now a museum. 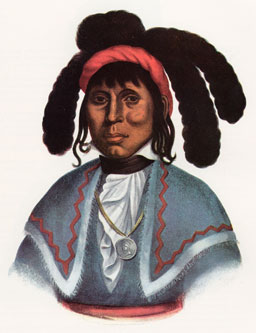 Chief Micanopy by Charles Bird King, 1825 painting.  Leading chief of the Seminoles who led the tribe during the Second Seminole War. 1862 .50 Cent Note
from Harley L. Freeman Collection Unique and only scrip known from this historical town